Your Guide to an Awesome Saint Patrick’s Day in Melbourne 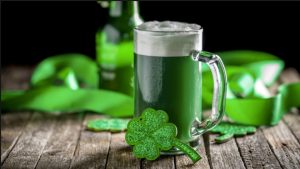 It’s highly unlikely that you haven’t experienced (or at least heard of) Saint Patrick’s Day by now. This patron Saint of Ireland has hero status around the world and his death is observed with huge celebrations every March 17th.

Melbourne would never be one to miss out on this grand opportunity, so the city gets decked out in green and partakes in a hefty number of memorable activities. So what is Saint Patrick’s Day all about… and how can you get involved in Melbourne?

The method behind the Saint Patrick’s Day madness

Saint Patrick was kicking around in the fifth century as Ireland’s patron saint and apostle… completely unaware that his name would one day be associated with beer, parties, music and all things green. As a sixteen year old he was kidnapped from his birthplace – Roman Britain – and brought into Ireland to be a slave. 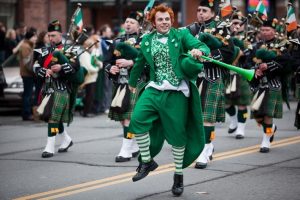 Patrick was made of stronger stuff than that though. He escaped, but there must have been something about the place; he returned later with the gift of Christianity, which he is now credited with bringing to the people of Ireland. He’s said to have explained the Holy Trinity to the people using the shamrock.

After his death on March 17, 461 (as far as we know), he became a firmly fixed part of Irish culture. As the Irish love to celebrate, it’s not hard to imagine how Saint Patrick’s Day has become what it is now: festivals, parades, music and dancing, foods and of course the abundance of beer and liquor it’s now famous for. All of this happens against a backdrop of green, representing beautiful Ireland. You simply have to be green to be seen.

All things Irish in Melbourne

Melbourne loves the party as much as Dublin does… well, we can’t prove it, but we seem to be giving it a good go! However, that’s not all there is to Saint Patrick’s Day in Melbourne. We are going to take a well-rounded look at all that you can do in this city to celebrate this special day.

Although the pubs and bars are an integral part of the fun, we will first take a look at some of your other Saint Patrick’s Day options: 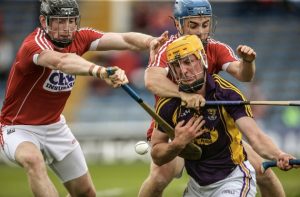 What about getting involved in some Gaelic games? Gaelic Football, Hurling and Camogie are traditional Irish sports that have been played across Australia for decades. They’re well loved by Irish immigrants and backpackers who want to keep up the tradition here in Melbourne.

Gaelic footy is played by two teams of fifteen players. The idea is to score by kicking or punching the ball into the opposing team’s goal. Why not round up your friends and arrange a game of Gaelic football in Irish fancy dress? Find ideas for that below…

When we speak of hurling, we don’t mean purging your beery excesses after the St. Paddy’s Day parties. Hurling has been happening for 3000 years and is the fastest field sport in the world. It’s similar to Gaelic football, except you use a wooden stick to volley the sliotar (a little ball) between the other team’s goalposts. It’s pretty full on with lots of body contact… similar to rugby in that sense.

Otherwise, ladies can get together and set up a game of camogie… it’s basically just hurling for women! If you’re looking for events, ideas or equipment, you could contact the Gaelic Football & Hurling Association of Australasia to see if they can help you out.

Immerse yourself in Irish history with a visit to the immigration museum. Here you can get a full insight into how Irish immigration played a huge role in forming the Australian nation as it is today.

You’ll get to dip into the stories of the many thousands of Irish immigrants from the 1800s who escaped the potato famine, embarking on a perilous journey over to Victoria. There are also performances on special days, such as children’s Irish dancing.

If you see fit, you can ask the museum to assist you in researching your own family history. Maybe you have some Irish roots after all? 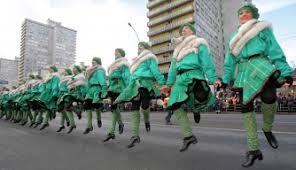 Melbourne Irish Festival is a fun affair for families, friends and whoever else wants to have fun! It actually starts on 18th March – from midday until 5pm, in Edinburgh Gardens, North Fitzroy. It’s all about celebrating the culture and heritage; it aims to have a true community vibe.

There’s a lot of live music, the mandatory Irish dancing, and plenty of kids activities… there will be races, sports, face painting, stilt walking, and other fun things for them to do. No need to worry about it being a rowdy and boozy affair, this one is more about wholesome community fun.

Dress up in Irish costumes

Not many people miss a chance to get their green clobber on and dance the night away on March 17th. In fact, tradition dictates that if you go out not wearing green, fellow revelers are welcome to pinch you hard! If you don’t want to be showered in nips, it’s probably smart to conform! 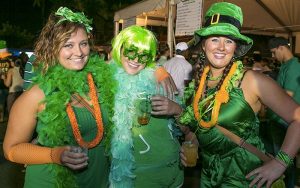 So what should you wear? Ladies, if you want to go for a sexy look, then the Irish girl costume is for you. Although it’s hard to stand out in an all-green crowd, with this costumes short white frilly sleeves, fitted bodice and shiny green skirt, you can’t fail to be a head-turner. Couple that with the saucy white knee-high socks and a red wig, and well… we can’t be held responsible!

Men and women can both morph into leprechauns for the day if they wish… or they can morph into Irish morphs! It’s so easy to accessorize for Saint Patrick’s Day too. You can choose from a range of green hats: think top hats, miniature leprechaun hats, Irish cowboy hats… and then there are green wigs, necklaces, stripy green and white stockings; you can also wear bow ties, shamrock glasses, braces and more. Whatever you do, be seen to be green!

And now for the parties, pubs and general revelry:

There are so many Irish pubs and Saint Patrick’s Day events in Melbourne… it would be impossible to list them all here; but here are a few favourites you can choose from:

The Last Jar is dedicating five whole days to Saint Patrick’s Day revelry. You can expect a full range of entertainment leading up to the big day.  On the 15th and 16th March there will be music sessions and the usual Irish drinks on offer.

On the big day, get there early for an 8am breakfast if you’re dedicated. Music kicks off around lunch time, and there will be Guinness, Kilkenny and Magners on tap. If you can bring yourself to go back there again the next day, you’ll be offered a recovery breakfast.

PJ O’Brien’s aim to give you a superior yet classic Saint Patrick’s experience. Again, get there for 8am for an Irish brekkie and pint of Guinness. Then you can join in the fun and festivities from 10am. There will be face painting, Irish dancing, pipers and more. The Irish bevvies will be flowing all day, so plan to make a day and night of it! 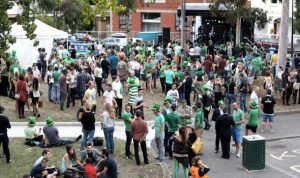 Melbourne’s ‘home of Guinness’ welcomes you on Saint Patrick’s Day every year with Irish breakfasts, soda bread, and… plenty of Guinness! Here’s a review of a typical Saint Paddy’s Day at the Dan O’Connell to whet your appetite for all things Irish. They do it very well indeed!

Become a connoisseur of Irish whiskey and beer

Why not make this a sophisticated affair? Until the effects of these potent Irish beverages become apparent, at least. A spot of whiskey or beer tasting is a great way to spend Saint Patrick’s Day.

If you get down to the Celtic Club you can join the Hyde Irish Whiskey tasting between 2 and 3pm. Make sure you’re well dressed in your green clobber and you’ll be in with a chance of winning a bottle of Bailey’s.

If you’ve really got a taste for the whiskey, here’s one you won’t want to miss: Troika Bar (Bar 106) are putting on a whiskey tasting event that brings you the world’s most exclusive whiskeys. You’ll need a ticket, but that includes a cocktail and four Teeling Whiskies. You’ll also munch on cheeses and sharing boards.

If it’s beer you’re hankering for, get a belter of an Irish beer experience by downing a boilermaker. What is a boilermaker? Well, it’s a whisky and a beer! First you’ll down your whiskey, and the beer will be your chaser. If that appeals, you’ll want to make your way down to Stomping Ground. Here you’ll also be given a limited edition Coffee Stout and small batch Irish whisky pairing. Don’t expect to remain remotely sober!

So as you can see, Melbourne has a wealth of opportunities for celebration on Saint Patrick’s Day. We hope you manage to find something that appeals to you… but whatever you choose, you can’t fail to have fun with all those upbeat Irish vibes in the atmosphere. Enjoy yourselves! 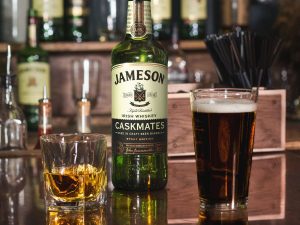