How to be a Truly Memorable Christmas Santa

Christmas wouldn’t be the same without Santa Claus. He’s always been an integral part of the Christmas anticipation for youngsters, and it’s fun to witness their excitement when they get an opportunity to meet him. Dressing up as Santa isn’t difficult, we know that. But doing it well? That’s another story!

If you want to maintain the Christmas Santa mystery, he will have to do a grand job of convincing his little disciples that he’s the real deal. Arranging for Santa to come and do a few visits this year will make this Christmas memorable for everyone involved. We’ve got a little gift for you: our best tips on what makes an authentic Santa experience for all involved – including Santa himself.

Who makes a good Santa Claus?

It’s important to choose someone who makes a good Santa. Most good sports would be up for the challenge and getting into Santa character can be great fun!

For a start, it needs to be someone you trust, so a friend or relative is ideal. They must like kids and be a comfortable entertainer. Santa would never feel awkward under scrutiny! Knowing how to get on the level of little minds definitely helps things to flow.

Your Santa doesn’t need to be old with a white beard; they just need to be convincingly jolly! The last thing is that they simply need to be able to follow instructions. Word them up beforehand to make sure they understand your Santa vision and you’re on the same page.

What should Santa really wear? 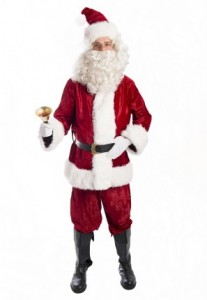 Any self-respecting Santa knows he has to deck himself out in the traditional costume of red and white jacket, hat, trousers and flowing white beard. But that in itself doesn’t guarantee he’ll be convincing! It’s the extras that make the experience authentic – and magical – for the kiddies.


Once you’ve got the basics sorted, you’ll need the following:

A Santa theme is the icing on the Christmas cake 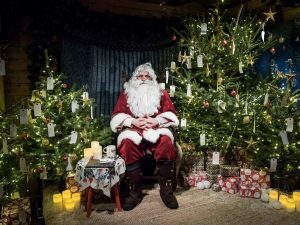 Set the scene and prepare for Santa’s arrival. Once you’ve decided on Santa’s rounds, get collaborating adults to drop hints that he is coming well ahead of time. Asking the children what they want for Christmas is a great way to build anticipation.

Your theme will need to consist of the appropriate Santa music. Christmas carols are a must, and singing along with them makes a great atmosphere. If there are any dogs in the participating families, dress them as reindeers. Simple gifts should be at hand: lollypops, playing cards, etc.

Santa will need somewhere to sit down while he meets the kids, so put out a comfy, decent-sized chair decorated with Christmas tinsel. He can get comfy and the kids can come and plonk themselves in his lap while he chats to them about their Christmas wishes. He’ll also need a helper, so enlist the help of a willing elf who will keep the kids in line and hand out gifts.

If you can stretch to a fake snow machine, this would make a great touch. If not, spray the windows and whatever else is appropriate with some fake snow, and have plenty of white tinsel around for a snowy effect.

Santa should plan to arrive by vehicle to be truly memorable. Ideally a fire truck or limousine, but if not, a regular car will do… with someone else driving, of course!

Final tips for a successful day 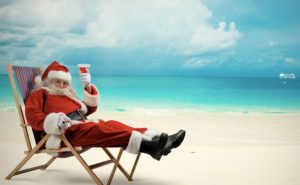 Remember to word up the kids who are a little older. They tend to enjoy blowing Santa’s cover (it’s the youthful “I know something you don’t” syndrome), so make sure any in the know don’t pass on the revelation!

Make sure Santa takes a break. This is Australia, not the North Pole. He’s out of his natural habitat and he’s probably going to sweat with a fake belly, hat and beard, etc.! Kids can get pretty demanding too, so regular breaks and drinks every hour and a half make sense.

A little sherry and a few mince pies won’t hurt, but make sure Santa has a straw to sip drinks through. He won’t want to dip his moustache in the sherry. When Santa heads off back to the North Pole, announce that he has to go to visit other kids; he should wave goodbye and tell them to be good. Get the kids to put out cookies and milk for Santa – he does hungry work!

We hope Santa has as much fun as the kids do! Wishing you every success to your Christmas event, from Creative Costumes.