Where to Have a Rollicking Good Time at Oktoberfest in Melbourne 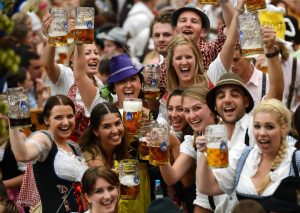 Beer lovers in and around Melbourne will be rubbing their hands together with anticipation of the much-loved annual event that is Oktoberfest. In Melbourne, Oktoberfest is nothing short of legendary. Year on year, Oktoberfest is becoming one of the most exciting events to go to, and many Australians jump on this fabulous opportunity to don some lederhosen and let their hair down.

Starting out back in the early 1800s, Oktoberfest has long been considered the world’s largest ‘Volksfest’ (beer festival). That’s more than 200 years of beer quaffing, dancing, eating and prancing! In keeping with this tradition, lots of places in Melbourne will celebrate this year – it’s simply bigger than ever. Here are some of the best venues Melbourne has to offer for Oktoberfest-goers on Saturday 14th October 2017:

Oktoberfest in the gardens 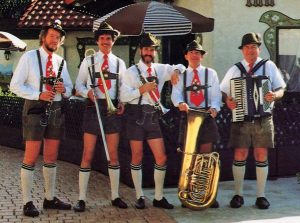 Oktoberfest in the Gardens brings people together for the seventh year running, in Melbourne, Sydney, Perth and Adelaide. Some might say it is Australia’s ‘biggest and best’ Oktoberfest celebration. If this excites you, head down to the Melbourne Showgrounds between 2pm and 10pm on 14th October. If it hasn’t yet grabbed your attention, maybe this video will do the trick!

Oktoberfest in the Gardens has two huge beer halls, so there’s no fear of waiting forever for your pint, whether that be beer or German cider or wine; you can also find tasty traditional German foods to satiate your hunger. Performances and entertainment will include roving performers, a sideshow alley, and a silent disco, but there will also be plenty of other entertainment and competitions.

With your ticket you’ll get a ‘commemorative event stein of 550ml’, plus one can of German beer (or alcoholic-free alternative). This is a popular event so grab your tickets early to avoid disappointment. 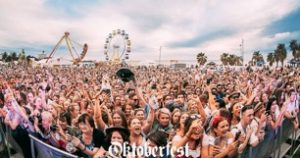 Oktoberfest at St Kilda is another immensely popular weekend event. You can go down on the Saturday and/or Sunday, but again, book early for this one!

Tickets to St Kilda’s event will secure you some of the best entertainment of the year. They’ve got a killer sound system and some great acts on the main stage to keep you jigging around in your lederhosen, including party tunes, R&B, and some live acoustic covers. The decoration is authentically Bavarian, the beer halls will be full of Germany’s finest beverages, and there will be plenty of German dishes to munch on, from Bratwurst to pork assortments and pretzels.

Competitions abound, and they’re worth entering for the great prizes promised. It’s a good reason to deck yourself out in the finest lederhosen, as there’s a best dressed male and female competition; there’s also a ‘hold the stein’ comp and even a German limbo one. As if that weren’t enough, there are some amusement rides. Oktoberfest at St Kilda promises to be unforgettable!

Another great option for your Oktoberfest celebrations is the Royal Melbourne Oktoberfest at the Royal Exhibition Building (REB), a stunning listed building worth visiting whatever the occasion; it gives the German beer halls a run for their money.

Claiming to be ‘the most traditional Oktoberfest event Melbourne has seen’, the event takes place in two sessions (day and evening) and it is unique in that it features all of the six Munich Oktoberfest-breweries; you’ll be able to get your hands on more than fifty imported German beers and plenty of other wines, spirits and soft drinks. 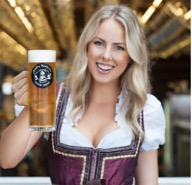 Catering consists of authentic Bavarian cuisine, such as pork hocks, sausages including bratwurst, schnitzels, roast chicken and some bread products like pastries and pretzels. Entertainment-wise, you’ll experience Oompah bands, folk dancing and a few on-stage competitions. Tickets are limited, so get yours now.

Oktoberfest wouldn’t be Oktoberfest without the celebrations taking place at the Beer Halls. You have plenty to choose from; there is Munich Bräuhaus, Hophaus, Hofbräuhaus and its sister venue The Hof Downtown, the European Bier Café, and Bridge Road Brewery. Most Beer Halls will require pre-booking for Oktoberfest so check out their sites for tickets.

At these places most days resemble Oktoberfest, but they go all out for this annual event. As the venues are designed to be as authentically German as possible, you can expect the most authentic Oktoberfest experiences. 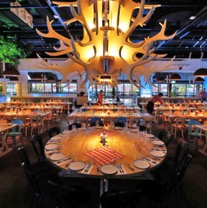 For example, the Munich Brauhaus state-of-the-art venue with its high truss ceilings can hold more than 900 people; it overlooks Melbourne’s South Wharf Promenade and boasts mezzanine floors, a stage, three bars and a dining room. We endorse their opinion that you should aim to “party like it’s nein-tein-nein-te-nein.”

Then there is the Hofbräuhaus, an icon in Melbourne since its opening in Market Lane in 1968. Opened by a German expat by the name of Helmut Meyer, this Beer Hall was the first Hofbräuhaus franchise outside Europe. As you would expect, they will serve up traditional German dishes a selection of Hofbräu beers on tap.

Other venues that can offer you a fabulous Oktoberfest experience are the German Tivoli Windsor Club, and Ormond Hall/The village (St Kilda Road). There’s also The Café at German Clocks, Fika Weinstuble and Olinda’s Cuckoo Restaurant.

With so many excellent venues and events to choose from, you can’t fail to have a rollicking good Oktoberfest here in Melbourne. So get your tickets, sort out your Lederhosen, gather your closest together… and let’s get this show on the road. Prost!