What Is Cosplay And Why Should You Do It? 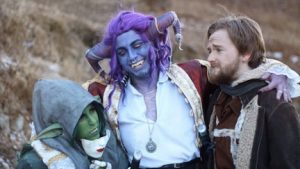 The upcoming Supanova comic con and gaming expo this month got us thinking. Conventions like this would not be what they are if it wasn’t for cosplay. Thanks to cosplay (and a few other factors) they are playgrounds for all walks of life. For a few days people get to reinvent themselves in the most flamboyant and dramatic ways. That’s exploration at its finest!

If you’re looking for a day out with a difference, go along to a cosplay/gaming convention. They’re a novel way of hanging with friends, and if you’ve got any kids you can take along, you’ll probably make their year!  We take a look at what is cosplay and why you should do it, and where you can go in Melbourne for the best cosplay activities this year.

Cosplay is a blend of two equally fun words: costume and play. It sounds a bit like fancy dress, but although there are similarities, there is a lot more to cosplay than just dressing up. Cosplayers are living a world of pure imagination, which is total fun for everyone present.

Cosplay actually has Japanese influences, since it all started with characters from computer games. The original cosplayers delighted in emulating these characters in as many ways as possible. It didn’t matter if that was dueling, rescuing, leaping or rolling… whatever the characters did, the cosplayers would follow suit, so to speak.

When something is truly entertaining, it stands the test of time, and cosplay is now going stronger than ever. One of the main differences between fancy dress and cosplay is that cosplay takes things to a whole new level: it’s all about accuracy and attention to detail. You are not only looking like your chosen character – you are mimicking all aspects of them.

Cosplay proponents create leagues of their own

Those who create their own cosplay costumes tend to go all out. The time and effort they put in is quite mindboggling – they’ll sometimes spend months on just one piece, and occasionally up to a year! These people will showcase their impressive efforts at conventions like Supanova and Comic Con, so it’s worth going along for this reason alone. The entertainment knows no bounds.

Superstar cosplayers don’t drop the act when the photo shoots are over – they maintain their character’s persona for the whole time, purely for the entertainment of those around them. This is why kids adore cosplay conventions… they are surrounded by the superheroes, movie stars and cartoon characters they’ve admired for their whole lives. In this fantastical realm, they may have a hard time telling what’s real!

Who can do cosplay?

Well, anyone and everyone! Everyone from little kids to outgoing grandparents love to join in the cosplay fun. Of course not everyone has the time, dedication or skills to create the kinds of masterpieces we mentioned above. The good news is that cosplay can be done by anyone with the ability to change an outfit and the guts to act the part!

So going along to a cosplay convention doesn’t mean you have to spend six month’s wages creating your outfit. You can simply hire one and inject some life into it with a winning performance! Your performance doesn’t even have to be stellar, actually, unless you’re planning to enter a competition. The name of the game is to enjoy yourself, so how far you take it is up to you.

Reasons for attending a cosplay/gaming convention

There are so many reasons for you to attend a cosplay convention. We can’t actually think of any reasons why you shouldn’t! If you need a little convincing, we have a few more ideas about what makes cosplay so refreshing and worthwhile:

We’re not saying that your life is mundane, but of course your average day is probably not that unusual! The zone you’ll find yourself in at a cosplay/gaming convention is a whole new world… anything goes, and fantasy motivates all happenings. With cosplay, there’s no room for the stresses and responsibilities of the ‘real’ world. Kiss them goodbye!

A day or two at one of these conventions is very refreshing for the spirit! You’re bound to walk out with lots of memories and the recognition that life is literally what you make it… temporarily or otherwise! 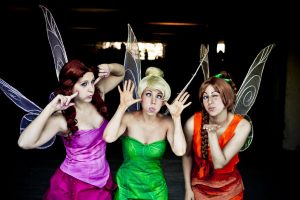 As you might expect, the world of cosplay is an incredibly sociable one. It’s so easy to make new friends, as everyone well and truly lets their hair down. They all have one thing on their minds: fun! Straight away, you’ve got plenty in common with your fellow convention-goers. They are all fascinated by certain fantasy characters, and they are all in a playful mood.

These things make a great basis for connecting. Who knows, maybe you’ll make some close friends with whom you can attend many more conventions in the future. We all need a few friends who are always up for a fancy dress party now and then, if nothing else!

Our imaginations rarely get to roam free without inhibition. Cosplay positively encourages this; for a start, there are innumerable characters to choose from. You could probably spend your life in character if you so desired! Feel like being an alien, or an animal, for once? No problem. How about a superhero of the opposite sex? Why not?

Building your characters’ personas and getting together your costumes is a great way to explore the depths of your own imagination… and that is very healthy and refreshing. Let your creativity loose on the world!

Bring back your inner child

If you’re new to cosplay, it might be tempting to dismiss it as something only for comic book nerds or immature adults. Don’t be fooled… it’s one of those things you can’t appreciate until you’ve been a part of it. There’s absolutely nothing wrong with bringing out your inner child – it’s totally freeing.

How many times were you told to be quiet or stop being silly when you were a kid? Nobody’s going to tell you that here. By the end of it all, you might even find you’re hunting out the next convention… and you wouldn’t be the first. 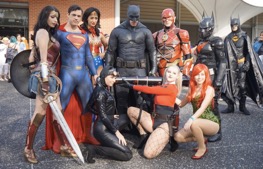 Where to get your cosplay on in Melbourne

Supanova Comic-Con & Gaming Expo is a long-standing event that is absolutely packed out with fun-seeking fans of pop culture. It’s been going since 2000, and pays homage to the imaginary worlds inspired by comics, sci-fi, fantasy, anime, gaming, nostalgia and literature. People come here to celebrate and rejoice in cosplay, in a bid to express their inner children and geeky sides.

At Supanova you’ll find special guests and celebrities, lots of fun exhibitions, fan clubs and lots of competitions and exclusive giveaways. All this is surrounded by entertainment technology, and you’ll be able to get your hands on all manner of toys and collectables.

The main point of Supanova is to encourage aspiring creative types and talented artists from around the world to come together and enjoy themselves on a national platform; here they can showcase their work for all to see, and everybody does their bit to invent new worlds and communities. It’s an out-and-out adventure!

Come along and take part in the cosplay competitions to win awards from best cosplay and best craftsmanship to best group and best in show… among others! Ignite your passion for your favourite characters for an unforgettable weekend with family and friends.

It’s not only a family affair though – you can go alone and make some new friends, or you can go with your favourite (and most imaginative) friends. Every event consists of a show floor packed with exhibitors and one-of-a-kind panel events. You can also find some awesome celebrities here, plenty of anime screenings, and of course… cosplay competitions!

Once you’ve decided on a convention or two to attend, you’ll probably be wondering who your perfect cosplay characters are. There are just so many to choose from. Check out our article on the top ten marvel characters to dress up as, if you need some inspiration.

You could also consider dressing up as Starwars characters such as Emperor Palpitine or one of the Jawas. How about a Pokemon, a Power Ranger or a Disney character? Let your imagination dictate, and forget about limits. They have no place in cosplay, as any superhero would tell you!

So there you have it. Cosplay is a world inhabited by people of all ages, from all backgrounds, and with a vast array of personalities. When diverse people come together on common ground, it’s a fabulous opportunity to experience the richness of life. How often will you get a chance to dive into a peculiar world like this? Maybe only once or twice a year, so… make the most of it!