Time Machine: Go Back to the Roaring Twenties 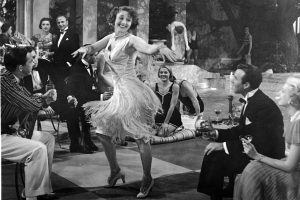 The 1920s is known as the roaring twenties for a reason. Today the roaring twenties still invoke nostalgia; it was the era that birthed glamorous fashion and decadence. This memorable decade was also the time when women became able to vote, and people generally became more liberated; personal cars were more prevalent, people became very interested in dance, and plenty of partying was the done thing. It seems we have never looked back!

The ‘flapper’ is the symbol of the twenties: a young woman in a short skirt, with bobbed hair. She would be outspoken, drinking, smoking, and inspiring future generations to do as they pleased. Of course that doesn’t account for the entire population of 1920s women, but many did go for the look at least. The flapper look is now seen as a glamorous and sophisticated style, and it’s showcased in movies like the Great Gatsby.

The 1920s was also the jazz age. The natural human instinct to dance really came into play, with youngsters dancing the Charleston, the flea hop, the cake walk, and the black bottom. Dance halls were the place to be, and jazz bands would rock the dance floors of world-class venues like New York’s Savoy. Record sales went through the roof, and radio stations popped up everywhere. Who wouldn’t want a piece of the roaring twenties action?

As it happens, you can do exactly that here in Melbourne between 5th of May to 30th July. Experience 1920s glamour at the historic mansion Rippon Lea House and Gardens, which is home to the National Trust of Australia’s Night Life’s glorious exhibition of more than fifty outfits; here you will find a display of the much-coveted twenties clothing the era is famous for. 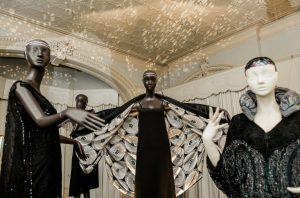 This historical fashion event will serve as an insight into the range of wonderful evening styles worn by the infamous flappers. And that’s not all; there will be talks, workshops, ‘fashion high teas’ and Gatsby-themed soirees. What a great idea for a fun way to get inspiration – you’ll now be ready to host your own roaring twenties party.
How to host your own roaring twenties party
Hosting your own 1920s party is guaranteed to be a whole lot of fun, for the dressing up alone. This is your chance to shine; go out of your way to be the embodiment of glamour with a glitzy 1920s costume. On the night, for the female guests you could consider hiring a make up artist to put the finishing touches to their glamour.

Men, you might want to come as a cooler than cool movie director, or perhaps you’re better suited to a slick gangster style? You have many options, but if you model yourself on Leonardo Dicaprio in the Great Gatsby, you can’t go far wrong. Acquire a dapper suit, slick your hair back, shine your shoes and grab your bow tie; those twenties women will be dazzled.

Ladies, get your ‘flap’ on with beautiful evening gowns, heavily beaded silks and velvets; you might also go for one of the iconic feathery headdresses and/or feather boas. Colourful beads, fake fur and lavish lace complement classy evening gloves; the gloves are also a major part of this sophisticated look, and are enough to make any woman feel elegant. Whether they behave elegantly is another matter! Don’t forget the power-make up; strong eye shadow and red lip gloss make for head-turning glamour. 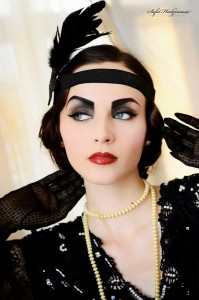 Treat your guests to a dinner party to die for. Appetizers and h’ors doeuvres were popular food at speakeasys, and they’re so simple to put together. Lay on a spread of bite-sized nibbles like olives, cheeses, deviled eggs, shrimp cocktails, nuts, and perhaps even some oysters if you really want to push the boat out.

For drinks, no twenties party would be complete without an abundance of champagne and cocktails. Gin was a popular beverage, so make some gin cocktails up and perhaps a few bowls of punch. If you’re brave enough, get some absinthe in. Also known as the ‘Green Fairy’, this drink was a powerful hallucinogenic spirit popular with 1920s artists and writers in France. However, you should probably prepare to regret it!

Screen popular 1920s films like The Great Gatsby or Miss Fisher’s Murder Mysteries. Anything black and white will do! Have a few props around, functional or ornamental: ideally a vintage record player, some old radios, and some jazz songs on vinyl if you can stretch to that. Whatever the medium, be sure to play upbeat jazz to get the party going!

If you’re feeling creative, make your own time machine from cardboard boxes. Old telephones will make the place look great, as would vintage sewing machines. Have a few accessories lying around like bobbed wigs, twenties style hats, evening gloves and cigarette holders to complete the glamorous look.

Play a few games to keep the energy high; why not have a ‘dance off’? Challenge your guests to learn a few steps from some of the famous twenties dances like the Charleston, and then award prizes to the smoothest movers. There’s nothing like a good old costume competition to keep people on their toes; everyone likes to feel that they’re the most stylish in the room! A murder mystery game wouldn’t go amiss, and the same goes for card games, which were very popular in the 1920s.

That should be about it! Now you’re all set to go back to the 1920s, and we trust you’ll have nothing less than a fabulous, glamorous time. 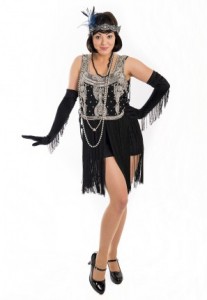