Get your Cosplay on at Melbourne’s Supanova 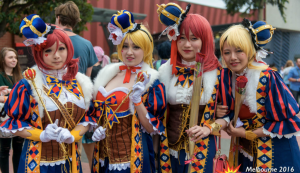 Cosplay. For those that haven’t heard this intriguing word before, it simply means ‘cos’tume role-‘play’; cosplay is simply the way in which you embody your imagination’s finest offerings – or that of talented others! Part of the human experience is exploration and we tend to be fascinated by others, especially the larger-than-life characters we see on the big screens; who hasn’t wondered what it would be like to have a very different life?

It can be even more exciting to imagine what it would be like to be an anime star, superhero or otherworldly being, as this is how the imagination can really go wild. Cosplay is ultimately about the fun of temporarily being someone else. It’s why fancy dress parties are so popular – dressing up is undeniably so much fun! And when you ‘go the whole hog’ by fully impersonating the character, it takes the fun to a whole new level.

What does cosplay do for you?

A lot, actually. Anyone who has ever thrown a fancy dress party knows that it’s out with inhibitions, and in with mischief! The novelty factor never disappears as there is a never-ending supply of characters to choose from, and you can even make your own up as you go along. What creative power!

Inhibitions are really impositions, let’s be honest. Imagine never having to conform! Dressing up brings freedom, laughter, and immediate connection with others. It’s the best conversation starter there is, and ironically enough there’s no room for stuffy ego when you’re running around in a Superman outfit. Besides, everyone wants to be friends with Superman. 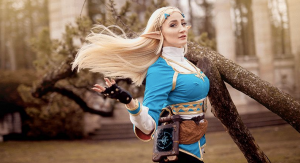 Actors and actresses immerse themselves into character every day, empathising and identifying with them so much that their portrayal becomes convincing. When you dress up in costume and adopt the personality of an idol, it’s not so different. Whether you’re throwing on leotard and leg warmers and leaping from sofa to wall unit with ‘Fame’ playing in the background or scaling drainpipes like Spiderman, you can experience everything from nostalgia to a totally new identity! Oh, and when you’re not really yourself, you can’t be held accountable for your actions… but you didn’t hear that from us.

Well this month, there’s only one sensible answer… Supanova! This unique event company really lives up to its lofty title. As Australia’s largest producer of pop culture live events, they will be the first to tell you that life is about imagination and adventure. After all, imagination is what creates an adventurous life! The more imaginative among us tend to be attracted to sci-fi and the fantasy realms, as these are the places where imagination can really run riot. The sheer number of visitors to Supanova’s Comic-Con & Gaming Expo every year is indicative of just how imaginative we Australians can be. 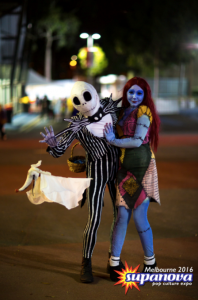 This year Supanova takes place on April 28 – 30th and stalls are aimed at a diverse set of ‘Supa-Fans’. If you’re into comics, sci-fi, video games, films, television shows, or wrestling then this is the place for you. Those who love toys and collectables, it’s for you too. Artists, showmen, tech fans… you’re going to be very at home here too. You’ll find celebs such as here (e.g. David Finch, David Boreanaz, Patricia Finch, Nolan North) and YouTube stars looking to meet their ‘in-the-flesh’ tribe! There will also be a wealth of local talent exhibiting their work, so plenty of exciting opportunities and memories in the making.

If anything goes, what will you go as?

Since the turn of this century, Supanova has been the hub for Australian pop culture fans. For them it’s a haven where they can experience other worlds without interruption from this ‘typical’ 3D one! Supanova promises freedom and inspiration in equal measures. This is the place where comics and anime really come alive, sci-fi becomes current reality, and gamers are in heaven. All of this comes together in one huge celebration in which anything goes, so why not join in the fun and liberate the creative power that is your imagination?!

It probably goes without saying, but Supanova is also all about cosplay. You just can’t go along without morphing into the superhero or comic star of your dreams – it would be a travesty! Supanova presents us with an unmissable opportunity to step out of society’s shackles and embrace fantasy life. They offer some covetable prizes for best costumes, best cosplay, best performance, teams of costumes and more; and as the seasoned pros of the comic-con and gaming industry have created a whole library of characters for cosplay lovers to choose from, who will take your fancy?

The Incredible Hulk or a Power Ranger? Maybe sexy Catwoman or Xena Warrior Princess is more your style? Gamers might want to hurl themselves around in a Sonic the Hedgehog costume, while cartoon lovers might embody Captain America for the night. Whatever you go for, Supanova wholeheartedly encourages you to ‘express your inner geek’, or that famous inner child, so perhaps it’s time to give these hidden gems the centre stage!

They are well known for welcoming people of all ages, and this hospitality is always gladly accepted – whether you’re seven or seventy, singleton or family of ten, this is your time to shine. Now you have the why, the how and the where, what are you waiting for?  Get your cosplay on! 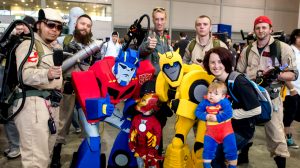