Bring Tarantino Movies to Life With a ‘Killer’ Costume Party 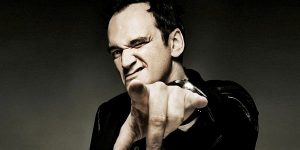 Tarantino is one of the world’s most interesting film directors. Whether you love or hate his movies, it has to be said that they’re unique. His entertaining style has earned him a hell of a lot of fans, and even people that don’t generally love movies full of sex, crime, and violence tend to appreciate them.

Tarantino has made 9 movies, some of which is has starred in himself in a cameo role. Most Tarantino movies are now world famous; they are made up of bizarre twists and turns, ingenious plots, and there’s as much humour as there is shock factor. Tarantino’s iconic characters have inspired many a costume party; they’re colorful, outrageous, and most are memorable. 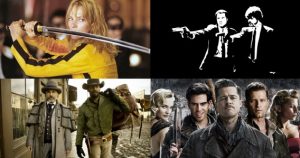 So popular was Kill Bill that Tarantino even made a sequel, Kill Bill volume II. ‘The Bride’, a former assassin, wakes from a coma four years after her jealous ex, Bill, had attempted to kill her on her wedding day, resulting in the loss of her unborn baby.

The Bride, fixated by the idea of revenge, decides to kill everyone who had anything to do with it. She embarks on a crazy and violent journey, sustaining as many injuries as she inflicts with her ninja sword.

The Bride is famous for her bright yellow two-piece outfit with black stripes, her blond bob flying in the wind as she executes her ninja moves. Ladies, you might prefer to become one of Bill’s assassins, nightmare nurse, Elle Driver, or deck yourself out in a white kimono as Crazy 88 leader O-ren Ishii. For the gents, there’s Deadly Viper Assassination Squad leader Bill himself. 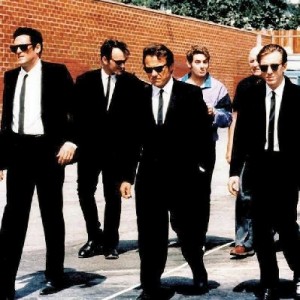 Six criminals who have never met before are hired to do a robbery, under pseudonyms. When the jewelry heist gets ambushed by the cops, the gang have to shoot their way out. Later the survivors meet again in a warehouse and figure out that they were set up. They set about finding out who is the traitor.

Played by an all-star cast including Harvey Keitel, Steve Buscemi and Tim Roth, the Reservoir Dogs are made up of six main guys, all named after colours: Mr. Blonde, Mr. Pink, Mr. Blue, Mr. White, Mr. Orange, and Mr. Brown. It’s pretty easy to dress up as any of them, as they’re famous for their uniform look – a black suit, white shirt, black skinny tie and dark shades. They’re a great option for a group of guys! 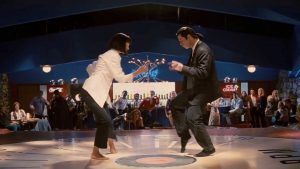 Pulp Fiction is one of the most respected Tarantino films, thanks to the captivating all-star cast and their wonderful characters. It probably needs little introduction! Philosphophical hit men Vincent Vega and Jules Winnfield find themselves in a spot of bother after Vincent is asked to look after his boss’ Marcellus Wallace’s wife, Mia, while he’s out of town.

Mia Wallace and Vincent Vega make for awesome fancy dress characters; her with her black bob, white shirt and black pants… and him with his comparable look of longish black hair, black suit and tie.

The pair of them look supercool in the dancing scene at the diner – a scene reenacted countless times at countless parties! Gangster Marcellus Wallace is also a formidable character to play, with his yellow and orange shirts, jewelry and shades. 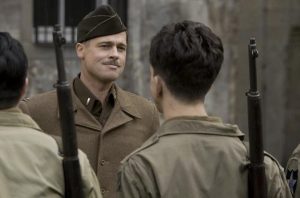 During the first year of Germany’s occupation of France, allied officer Lt. Aldo Raine brings together a team of Jewish soldiers with the intention of commiting violent acts of retribution against the Nazis.

His team joins up with Bridget von Hammersmark, undercover agent and German actress. Their joint goal is to bring down the leaders of the Third Reich. Shosanna Dreyfus has a similar goal, after witnessing the execution of her family, by Nazi Colonel Hans Landa.

There are so many brilliant characters to choose from in this movie. We particularly like Lt. Aldo Raine, played by Brad Pitt; he has plenty of presence with his army outfit, moustache and huge neck scar. He can usually be seen wielding his knife or gun, and a trademark wry grin.

From Dusk ‘till Dawn 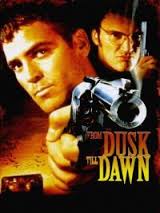 Seth Gecko is on the run from a bank robbery in which several cops were killed. He and his crazy, paranoid brother Richard (Tarantino himself), hotfoot it to the Mexican border, kidnapping a preacher and his kids in the process. They use the family’s RV to sneak across the border, and end up in a topless bar… this bar turns out to be a vampire’s haven – and it’s no mean feat for them to get back out.

Great Dusk till Dawn costumes to choose from might be the Mariachis (Mexican musicians), the vampires, or Seth himself with his famous tattoo, black suit and white vest. The question is, can you do it better than George Clooney?

There are so many Tarantino movie characters to choose from, we couldn’t possibly list them all here. There’s surely a character out there for everyone, so it shouldn’t be hard to fill a Tarantino costume party! We hope you have plenty of fun Tarantino style… but perhaps with a little less murder, if you can’t help it!