5 Australian Music Festivals Not To Miss This Season 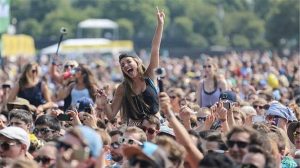 So here it is: 2018. We are fresh into the New Year and the festive parties are still alive and kicking in our memories. Does that mean we need to calm down and throw in the towel? Of course not. A date ain’t nothin’ but a number, and the many music festivals happening in Australia this January confirm this. The first couple of months of this year promise to be extremely eventful on the festival front.

That means Victoria and New South Wales has some epic fun in store for you… so yet again it’s time to out do yourself on the costume front and show this part of the world what you’ve got. One of the best things about festivals is that you get to be totally yourself – or whoever you want to be. You’ll have ample opportunity to bring out your ultra-glam side… anything goes, so who or what will you go as?

Let’s take a look at some of the awesome festivals happening and see if we can inspire your festival get up.

For the last twenty years and counting, Rainbow Serpent Festival has been an event not to miss. If you have missed it, there’s always 2018. This phenomenal gathering has gained international acclaim; it is known all over the world as one of the best music and arts festivals on the face of the Earth. 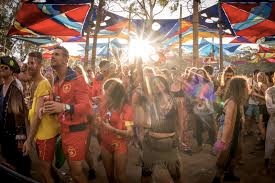 As the name suggests, Rainbow serpent embraces all that is colourful and musical. For five days, thousands of people come together to celebrate in style. Here you’ll find a playground for true expression – festival-goers deck themselves out in their most lavish creations, dancing the days and nights away in blissful states.

Rainbow serpent puts a lot of emphasis on community – they want you all to love each other! What better way to get conversations going than killer outfits and smiles? World-class musicians, DJs, artists and performers come together to set the scene, and there are crazy activities, inspirational workshops, talks and artwork for your entertainment.

What to wear to rainbow serpent?

Perfectly complement the stunning artistic décor with the most colourful attire you can get your hands on. How about a pretty Rio Carnival style costume, with its bright reds, oranges, yellows and greens? You’ve got plenty of room to maneuver in this with its short ruffle skirt… and the floral headpiece hides even the most heinous festival hair! You’ll be glad of this by day five. 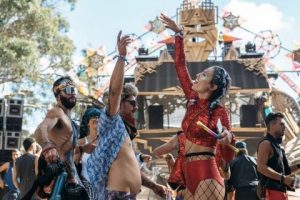 A brut-tropical border community of the arts, this three-day ceremonial gathering is set in the Victoria meadows. The 2018 Pitch Music & Arts Festival has many hands rubbing together in anticipation already. That’s because it’s famous for its unbelievable acts, among other things. Expect neoteric sounds from an eclectic mix of local and international artists.

The organisers have promised attendees an unforgettable day with a killer line-up of musical acts. You can expect acts such as ALTA, Booka Shade, Fortunes, GL, Haiku Hands, Mount Kimbie, Willaris. K and many more. If you’ve been before, you’ll already know how awesome this festival is, but the 2018 event looks like it will trump every one that’s gone before it.

What to wear to Pitch Music and Arts Festival?

This one is all about the music so why not embrace your musical spirit in a burlesque dancer kit? If you’re not the gender for that one, a Woodstock hippie dude might be more up your street. As you’ll be spending a few days jumping around, don’t forget your bum bags to store all your valuables, and a crazy wig or two wouldn’t go amiss. 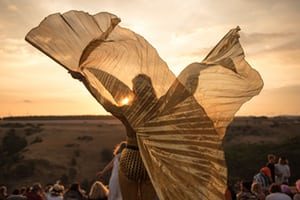 Golden Plains XII will be happening over two days and two nights in the breathtaking of outdoors. Set up 90km from Melbourne on private farmland aptly nicknamed the Meredith Supernatural Amphitheatre, this festival is one not to be missed.

As you would at many other festivals, you’ll be camping on this renowned Aussie bushland, on land with alluring names such as Spring Valley, North Pines, Mulwaverley and Tasmania. The amphitheatre is where you will go to find the brilliant line up that’s been promised. You can bring your campervan or a tent – whichever suits.

The thing about Golden Plains is its non-commercial ethos. This is what sets it apart from many other music festivals. You’ll need bring your own booze, so remember to fill your bags with as many beers (plastic or cans only) as you think you can consume… and then some. However, there is one cocktail bar, Pink Flamingo.

What to wear to Golden Plains?

For this festival, prepare yourself for the great outdoors and the emergence of your animal nature. Cheetah women are real head turners – especially those decked out in beautiful glittering make up. A lion or two wouldn’t be out of place here; a koala or kangaroo would fit in too.

Are you ready for Easter Boogie? If you like to get a little freaky now and then, this is the festival for you. The Boogie crew encourage one and all to bring out their inner weirdness, so you’ve got a great opportunity here to push the costume boundaries.

This three-day festival has heaps of carefully chosen local and international bands, which unsurprisingly is one of the main draws. Another aspect that draws the crowds in is the out and out strangeness: the festival boasts a wacky clubhouse, a hillbilly disco, and a shearing shed! As you can see, getting silly is standard. You’ve got plenty of bars and food options to fuel the fun, so all you need is your crazy clobber and your tents.

What to wear to Easter Boogie Music Festival?

Weird and wonderful is the way, so we suggest a bunch of hillbillies on tour. Stock up on lumberjack shirts and mullet wigs for this look. You might also head to the shearing shed dressed as a sheep, or Little Bo Peep. Otherwise, you could get your friends together and go bananas as bananas in pajamas. 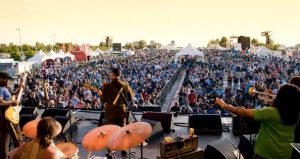 Australia’s very own Premier Contemporary Blues & Roots Music Festival is coming to you at the end of March. Easter Weekend has never been so good, if you’re one of the 100,000 people who spend it on the sprawling 120 hectares that make up Tyagarah Tea Tree Farm.

As the name suggests, people choose this massive festival to immerse themselves fully into the best music. With more than 200 performances on many different stages, you’ve got five full days and nights of musical diversity. With 5 licensed bars and beer gardens, and more than a hundred food outlets, you will never go hungry or thirsty.

What to wear to Bluesfest?

This one is all about connection, partying and celebration with a backdrop of incredible music. That means glam, glam, and more glam. Bring out the glitters, feather boas and body paint for this festival… or any other, for that matter! With 100,000 people milling around, standing out from the crowd is no mean feat, but it’s such good fun to try! Perhaps you could go as a bird of paradise, or a rock your way through the days as an 80s glamrock star.

If there’s one thing Australia does well, it’s music festivals. There are just so many! We don’t have space to list them all here, but you could also consider Groovin the Moo, an awesome annual event that happens in various Australian destinations from April 27th onwards.

If you’re still hunting down the world’s best festivals after this date, you won’t be let down. Check out this list of year round festivals in an around Melbourne where you can party like it’s 1999 to your heart’s content.

Oh, and don’t forget these staples

Whichever festivals you go to, there are some staples you’re going to need to make sure you not only shine, but that you’re fully equipped. A party make up kit is one thing, as is quality body paint. No make up will last three days without a top up! Likewise, bring along your glitter, confetti, feathers and wigs.

Wellington boots are often handy, and so are shoe bags or bum bags to throw in your bits and pieces. It’s so easy to lose a purse or wallet while under the influence, so be sure to keep it all in one well secured place on your body. Hats and headpieces are a great tool and hide a multitude of sins on the many ‘morning afters’.

Other great festival costume ideas include Arabian harem girls, Kylie showgirls (and other kinds of showgirls), ancient Egyptian pharaohs and safari or jungle outfits. Wishing you absolutely fabulous festivals this year from all at Creative Costumes!